We are proud to announce our 2016 Volunteer of the Year!

Raymond is one of our many dedicated volunteers at Utah Water Watch. He has been monitoring the Logan River every month since he began monitoring in August 2012 as a 7th grader. His are two of our longest continuously monitored sites. He is a very bright young man and we have learned much from his participation as a volunteer. He is soon off to college and we wish him the best of luck! We asked him a few questions about his monitoring experience.

Why did you start monitoring? 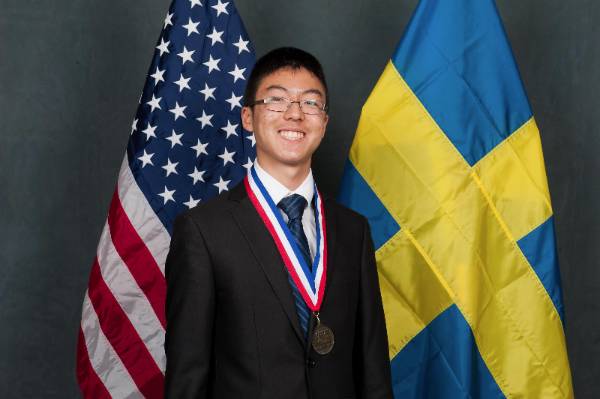 I started monitoring because I used to be an avid fisherman when I was younger, and spent many afternoons along the Logan River catching trout. I was already very interested in science, so the opportunity to both engage in real-world investigation and to visit my old childhood haunts was incredible.

How has volunteering impacted your thinking on what you want to study/do?

My volunteering has decided much of what I want to do. Being a water monitor has made me very conscientious of conservation and our common environment, and heavily influenced me to begin my nutrient pollution research project. It’s made me even more interested in the sciences and permanently invested me in environmentalism.

Can you tell us more about your nutrient pollution research project?

In summary, I water monitor the Logan River both upstream and downstream (where it merges with the Cutler Marsh) of Logan City. In my sophomore year, I noticed there was evidence for nutrient pollution in the Cutler Marsh, and made a science project about my data. After being inspired by my qualification for and participation in the Intel International Science and Engineering Fair (ISEF), in the summer before my junior year, I began a research project to investigate removing phosphate from water. Eventually, I found that using locally sourced silica sand in filter columns is a highly effective method for removing aqueous phosphate from solution. After competing in ISEF with another project, I’ve continued with my research and now aim to determine the process by which silica sand removes dissolved phosphate from water.

What have you learned through monitoring and working with Utah Water Watch?

Through monitoring, I’ve learned that immersion in one’s work is probably one of the most valuable things a person can have. While theoretical or abstract learning in the classroom can be enlightening, I often find that engaging in concrete applications and experience is most meaningful to understand the world. In working with the Utah Water Watch, I’ve realized the power of volunteer organizations and citizen science to make a real, tangible impact in people’s lives and in the world.

Raymond has monitored two sites in the Cache Valley. One is downstream at the Cutler Reservoir inlet (LBR-04-L), and the other is upstream on the Logan River at the mouth of Logan Canyon (LOR-02-S). We complied some graphs to show data on his two sites. 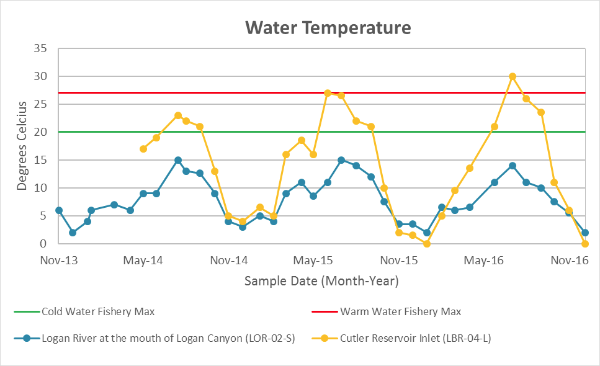 Above is a graph comparing the Logan and Little Bear River sites. The Logan River, designated a cold water fishery at the mouth of Logan Canyon, shows consistently cooler temperatures than the Cutler Reservoir Inlet which has more of a lake-like quality. The warmer temperatures at Cutler are caused by shallower depths, larger surface area, and slower moving water, which makes it a warm water fishery. The larger surface area allows more heat to be absorbed than a quickly moving mountain river. The data Raymond has collected during his time monitoring has been consistent with known trends for warm water and cold water fisheries.

To the right shows the distribution of dissolved oxygen measurements at the upstream Logan River site between November 2013 and December 2016. Higher dissolved oxygen is usually correlated with fast moving, cold water. This site tends to have a healthy amount above 6 mg/L of dissolved oxygen for all organisms that live in the river. The lower limit for when early life stages are present is 8 mg/L of which there are 11 occurrences. 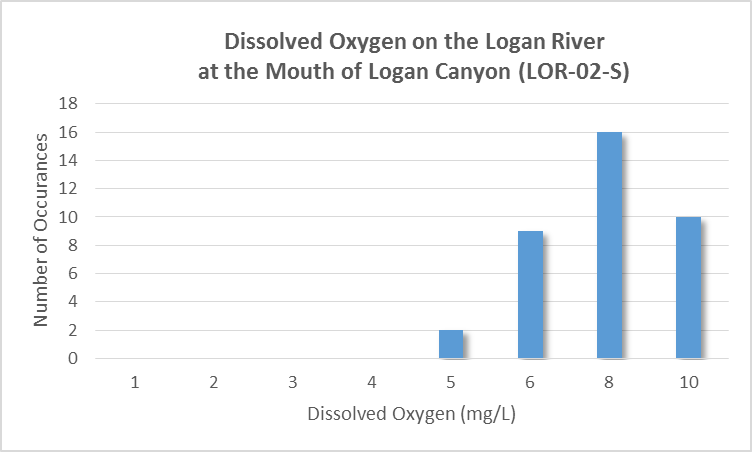