Growth Characteristics: A forb with aerial, jointed stems, which occur in two different forms. A single, simple, cone-bearing stem grows in early spring, and a vegetative, non-fertile stem grows after the first. This second stem has many whorls of slender, green-jointed branches. Roots are tuber-bearing and rhizomatous.

Flowers/Inflorescence: It lacks flowers, but has a single cone, ¾ to 1 ½ inches long.

Fruits/Seeds: Reproduces by spores, which look like a light yellow powder.

Leaves: Small and scale-like, often non-green, whorled, and united at the base to form a sheath around the stem.

Horsetail occurs in woods, fields, meadows and swamps, and moist soils alongside streams, rivers, and lakes, and in disturbed areas. It usually occurs on moist sites but can also be found on dry and barren sites such as roadsides, borrow pits, and railway embankments.
Horsetail is sensitive to moisture stress; drought conditions result in a reduction in the production of new shoots.

Horsetail is not an important range forage for livestock, and excessive amounts (more than 20 percent) in hay can cause scours, paralysis, and death in horses. Usually animals avoid the plant.

Silica extracted from horsetail is utilized for manufacture of remineralizing and diuretic medicinal products. Other potential uses of biogenic silica include industrial applications (abrasives, toothpaste, protective cloth, optical fibers, thickeners for paint, etc.), detergents, and cleaners. Leaf-odor constituents were used widely in the 1970's in perfumes but are little used now. These constituents can be used as food flavors and flavor enhancers, and as animal repellants. 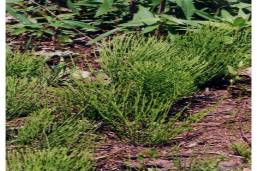 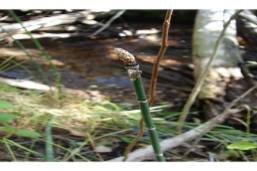 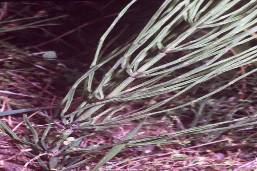