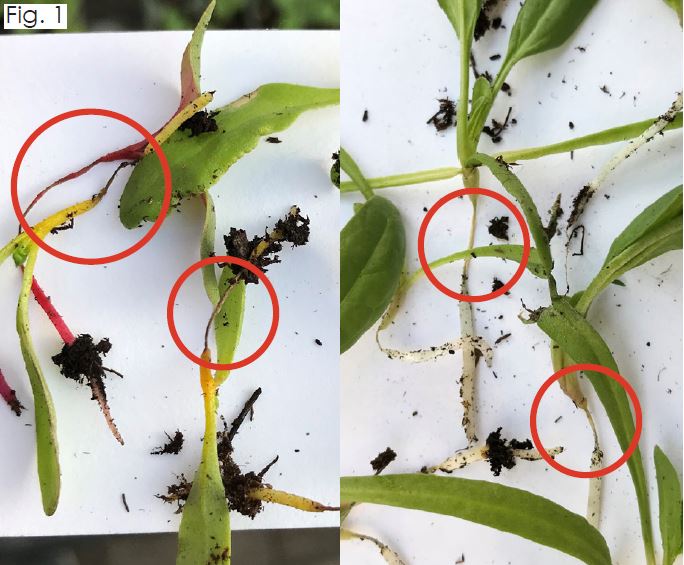 General Info: Damping-off is caused by several soil-borne fungi including Pythium, Rhizoctonia, Fusarium, and Phytophthora species. The fungi infect and kill the roots of germinating and established seedlings. They can survive in plant debris in greenhouses, reused seed trays, benches, and outdoor soils. Outbreaks of damping-off can occur when seedlings are kept overly wet. In wet conditions, damping-off pathogens produce spores that migrate to seed trays through openings in the tray bottom. Once symptoms are visible on seedlings in a tray, neighboring seedlings are likely infected as well.

Management: Sterilize pots and trays by soaking in a 10–15% bleach solution or quaternary ammonium chloride salt products. Disinfect greenhouse benches and other supplies. If infections do occur, seedlings should be disposed of along with the potting mix as they may harbor the soilborne fungi. 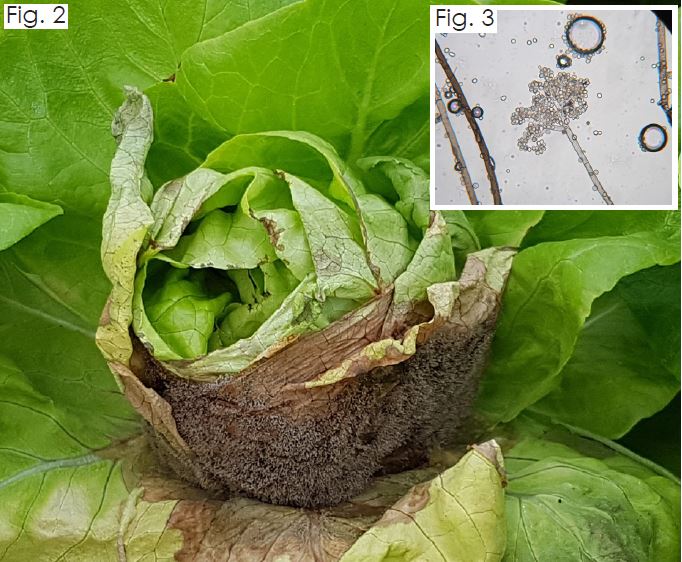 Severity: low-moderate
Other Hosts: strawberries, and other greenhouse crops

General Info: Gray mold is caused by the fungus Botrytis cinerea. The fungus overwinters on crop debris. Under the right conditions (cool and humid) it will cause infection of all plant parts and produce thousands of spores that initiate new infections. It is most prevalent in high tunnels, cool greenhouses, and tightly packed fields. Plants are most susceptible if they are damaged or have senescing tissue..

Management: Remove infected plants immediately from the area. Avoid injury to the plant tissue. Limit overhead irrigation so plant leaves do not remain wet. Use fans inside greenhouses to reduce humidity. Consider fungicides labeled for gray mold on leafy greens. 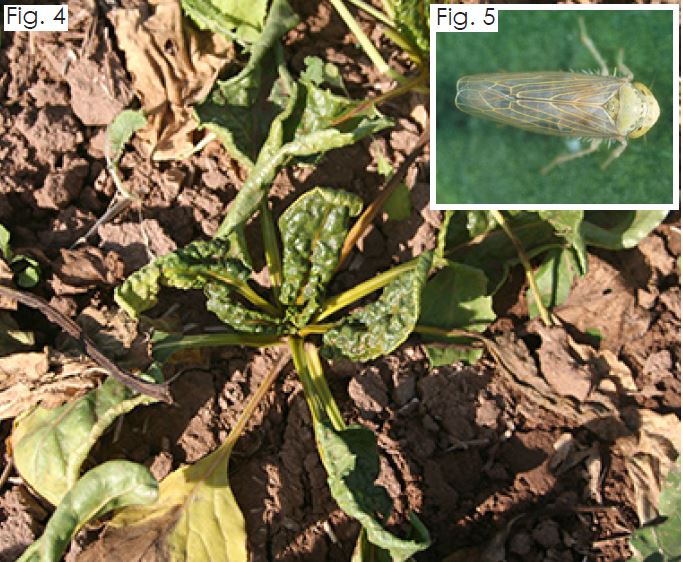 General Info: Beet curly top virus is vectored by the beet leafhopper (Circulifer tenellus). The disease is a concern during spring and summer. Beet leafhoppers acquire the virus when feeding on infected weeds or other plants and transmit it when feeding on healthy plants. The virus overwinters in living host plants. The severity of symptoms can vary from plant to plant, and outbreaks vary from year to year. 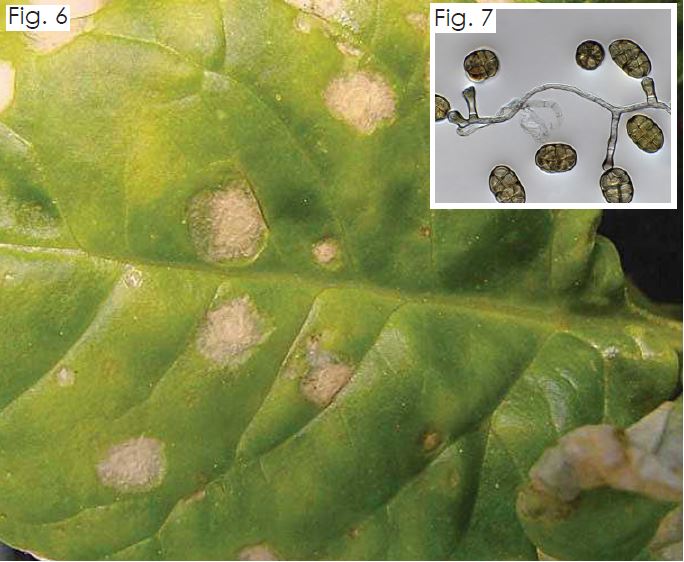 General Info: Leaf spots on spinach and chard are caused by the seed-borne pathogens Stemphylium botryosum f. sp. spinacia and Cladosporium variabile. Spores can also spread by wind and rain during cool temperatures (<65°F). Leaf spots on spinach, beet, and chard may also be caused by Cerospora beticola which overwinters on infected residue, weeds, and seed. It is primarily spread during high humidity when temperatures are greater than 75°F.

Management: Till or remove infected crop residue at the end of the season. Source certified disease-free seed. Rotate to non-host crops (outside of the Chenopodium family) for 2-3 seasons. Use drip irrigation to prevent humidity and moisture on foliage. 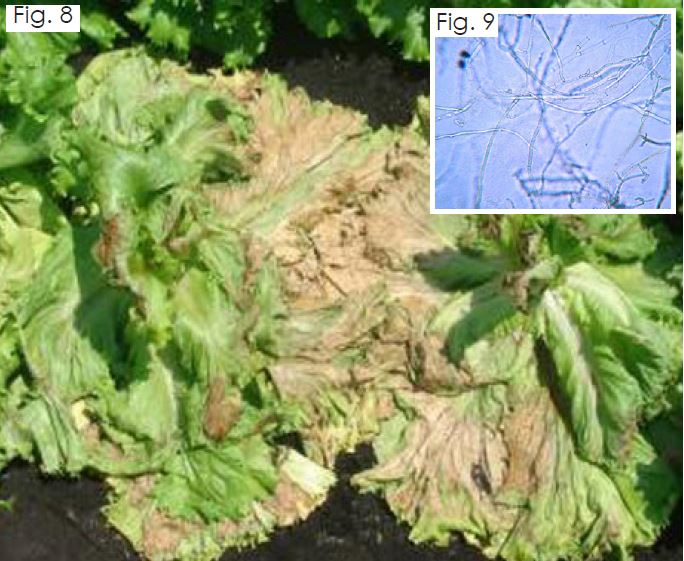 General Info: Drop is caused by the fungal pathogen Sclerotinia sclerotiorum. Infected foliage forms a watery, soft rot and causes leaf drop. The pathogen overwinters as survival structures (sclerotia) in the soil for up to 3 years. It spreads by wind-driven spores in cool, moist conditions, and wet soil.

Management: Deep-plow to keep the sclerotia away from the soil surface. Rotate crops with non-hosts. Use drip irrigation. Consider a fungicide such as boscalid, iprodione, or various organic options. 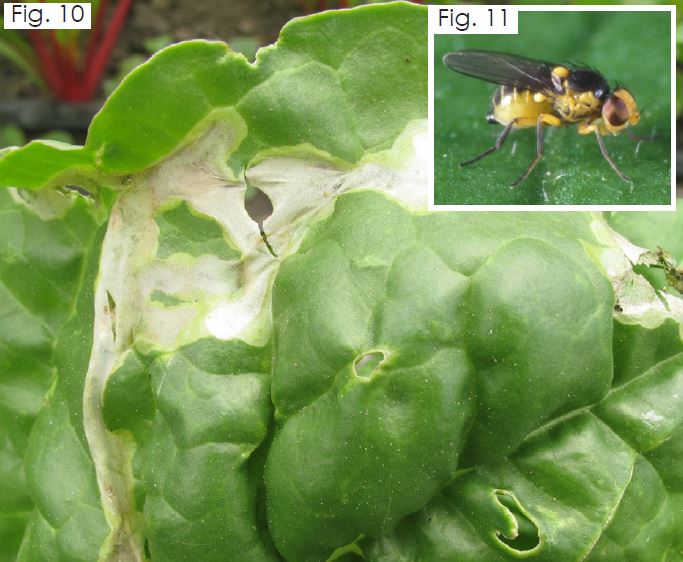 General Info: Adult flies range in color from black to gray; some bear yellow markings. Eggs are oblong and white in color. Larvae (maggots) are a cream-yellow color. Leafminer species have several generations per season and overwinter as pupae. They emerge in early-mid spring and larvae feed and tunnel between the upper and lower leaf surfaces creating “mines” or blisters.

Management: Use a row cover over leafy greens to physically exclude adult flies from laying eggs. Rotate crops with non-leafy greens. Cultivate soil after harvest to disrupt the overwintering pupae stage. Remove any infested leaves. Pesticides are not recommended as the larvae are protected between the leaf layers. 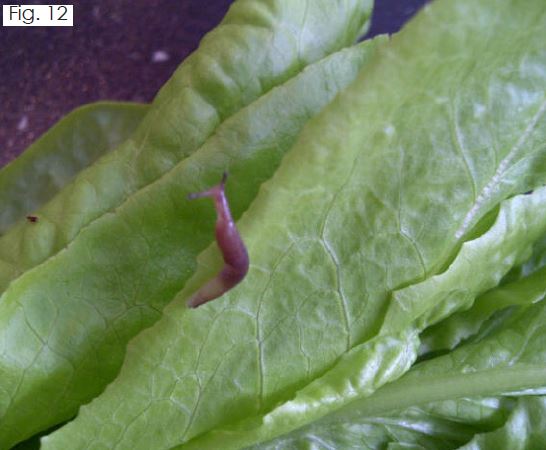 Severity: high
Other Hosts: most vegetables and ornamental landscape plants

General Info: Slugs and snails have similar characteristics except snails have an external, spiral shell. Both glide with a long, flat, muscular organ called a foot. Mucus or slime secreted by the foot aids in locomotion and dries to form a shiny white silvery trail, indicating that the pests are present. Both snails and slugs are hermaphrodites, meaning they have both male and female organs. All are capable of self-fertilization.

Symptoms: Irregular holes that have smooth edges on foliage. 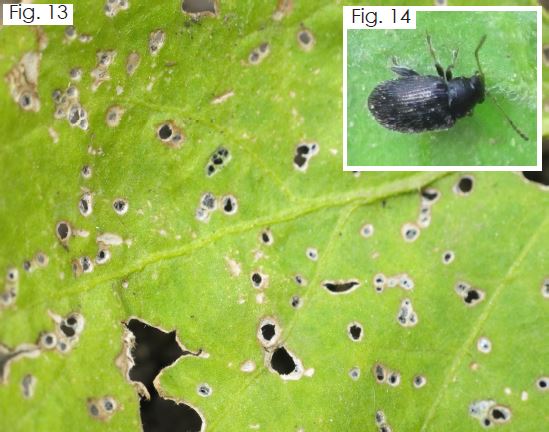 General Info: Adults have metallic bodies that range in color from black, bronze, bluish, brown, or gray, with stripes in some species. Larvae are small, white, and worm-like with a brown head. Most flea beetles overwinter as adults in protected places. Adults become active mid-late spring when host plants become available. When disturbed, adults will use their large hind legs to jump. 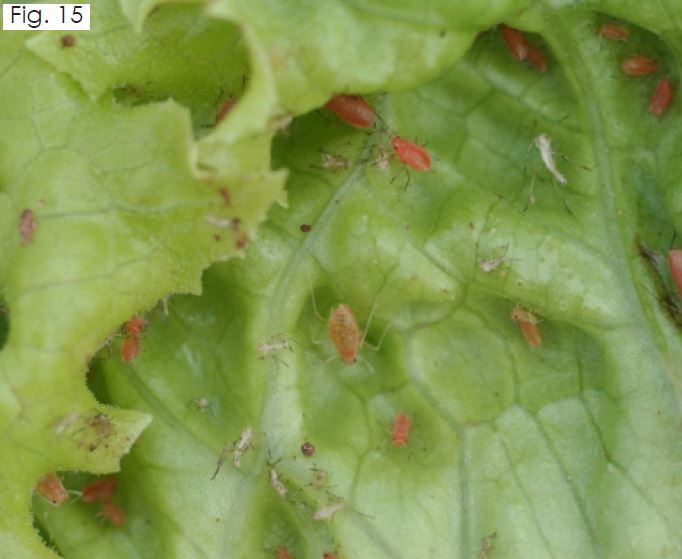 Management: Scout for aphid signs and symptoms frequently. Remove nearby weeds that can serve as an alternate host. Encourage natural aphid predators in your garden by planting attractive flowers and other plants. Organic insecticides such as neem oil, pyrethrins, or insecticidal soap must contact the aphids to work. 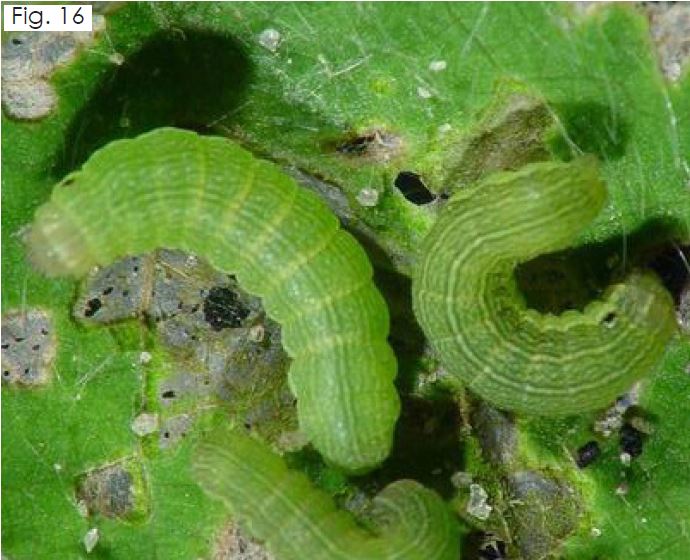 Severity: low-moderate
Other Hosts: most vegetable crops, ornamentals, and weeds

General Info: There are several species of armyworms present in Utah. Adult moths are mottled gray and brown with light-colored markings. Larvae vary in color from tan, green, to almost black. They are typically a concern from mid-July through September and have one to three generations per growing season. Eggs are laid on leaves, larvae disperse and feed on foliage and fruit, and mature larvae pupate in the soil.