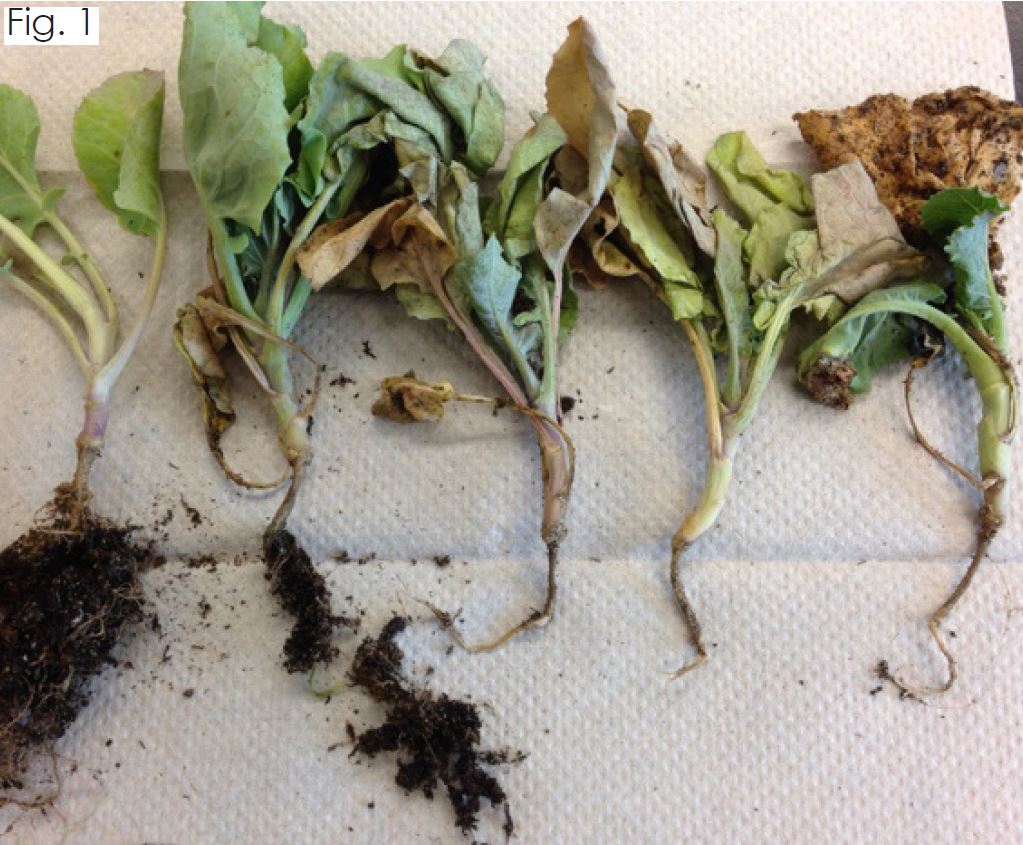 General Info: Damping-off (Fig. 1) is caused by several soil-borne fungi including Pythium, Rhizoctonia, Fusarium, and Phytophthora species that infect and kill the roots of germinating and established seedlings. The fungi survive in used seed trays, benches, plant debris in greenhouses, and outdoor soils. Outbreaks of damping-off can occur when seedling media are kept overly wet. Damping-off pathogens produce spores that swim to adjacent seed trays through openings in the tray bottom. Once symptoms are visible on seedlings, neighboring seedlings are likely infected as well.

Management: Sterilize used pots and trays by soaking in a 10–15% bleach solution or quaternary ammonium chloride salt products for 30 minutes to an hour. Disinfect greenhouse benches and other supplies. If an infection is identified, dispose of seedlings with the potting mix, as they may harbor the pathogen. 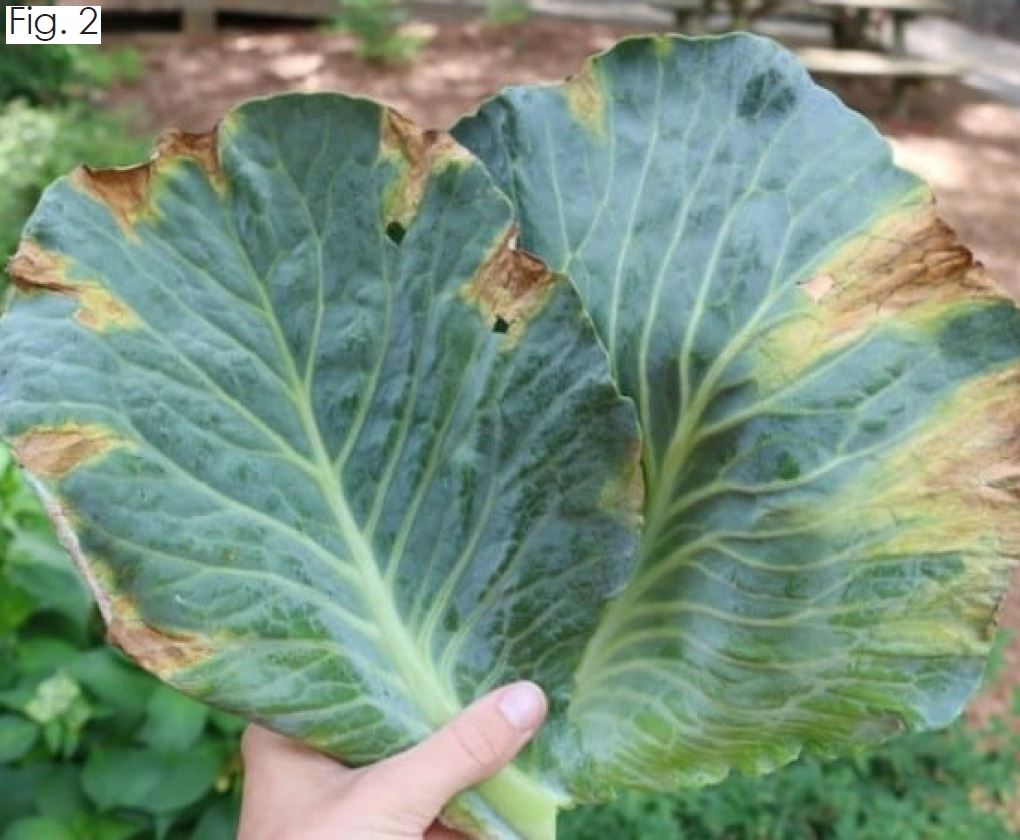 General Info: Black rot (Fig. 2) is a foliar disease caused by the bacterium Xanthomonas campestris pv. campestris. It can be transmitted by seed, splashing water, mechanical equipment, and insects. The disease develops under warm, wet conditions. Bacteria enter the plant through wounds or hydathodes (modified pores found on leaf margins), and eventually colonize the entire plant.

Management:Remove diseased plants and clean up plant debris that may harbor the bacteria. Avoid overhead irrigation to reduce humidity amongst plants and prevent spread of bacteria in splashing water. Source disease-free seeds and select resistant varieties. Consider a hot water seed treatment for saved or unknown seed (122 F for 25 minutes for cabbage, broccoli, and Brussels sprouts; 122 F for 15 minutes for cauliflower, kohlrabi, kale, turnip, and rutabaga). Some brassica varieties may be sensitive to hot water treatment. 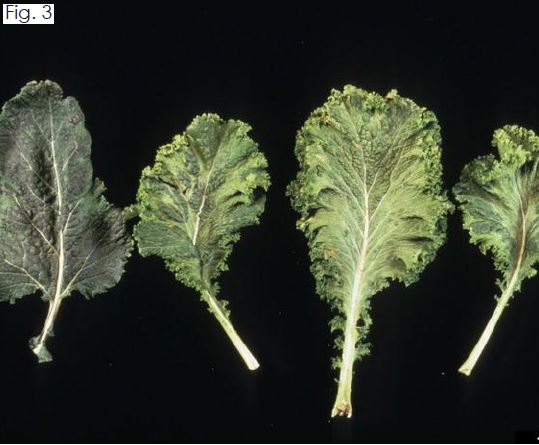 Management: Provide good weed control in the garden (many weeds may not show symptoms of the virus). Avoid planting susceptible crops near perennial brassica species like horseradish, especially if the perennial species is infected. 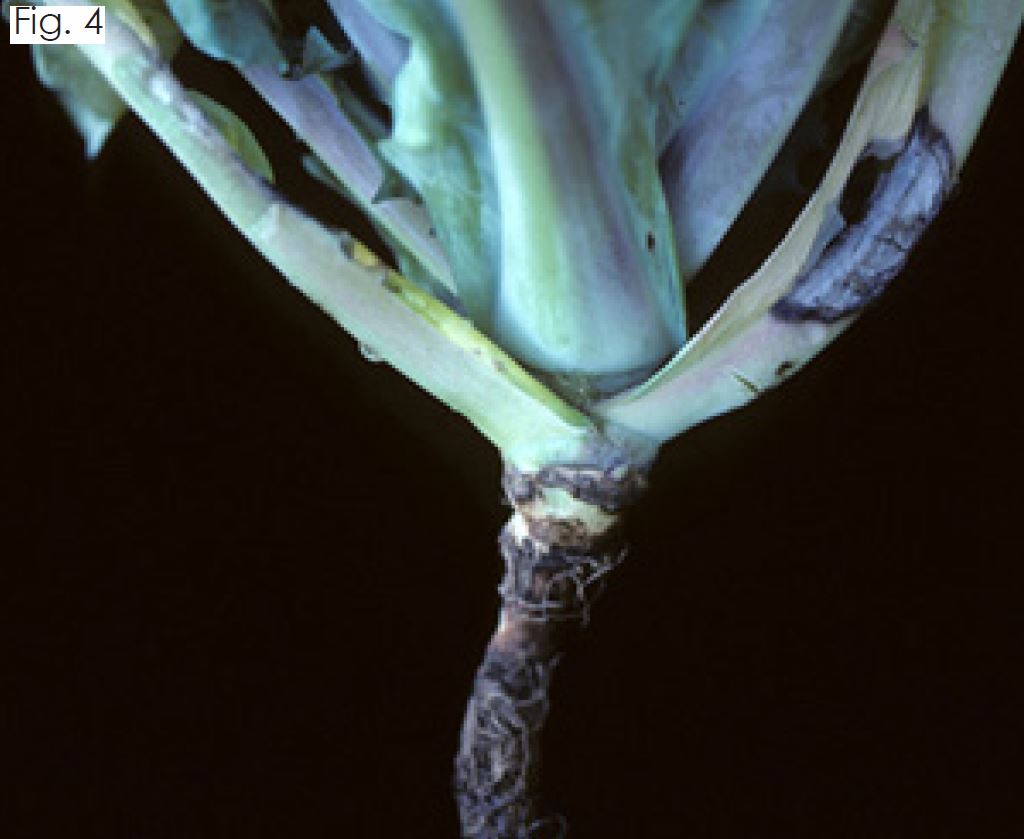 General Info: Blackleg (Fig. 4) is a seed-borne pathogen caused by the fungus Phoma lingam. The fungus overwinters in crop debris. Spores germinate on the leaves and colonize the petioles at the seedling stage and move through the vascular tissue and into the main stem. Spores are released when temperatures reach 46 F and infection occurs above 68 F.

Management: Source disease-free seed or sterilize seeds with a hot water treatment (see Black Rot above). Remove crop residue at the end the season. Rotate away from brassicas for three to four seasons. 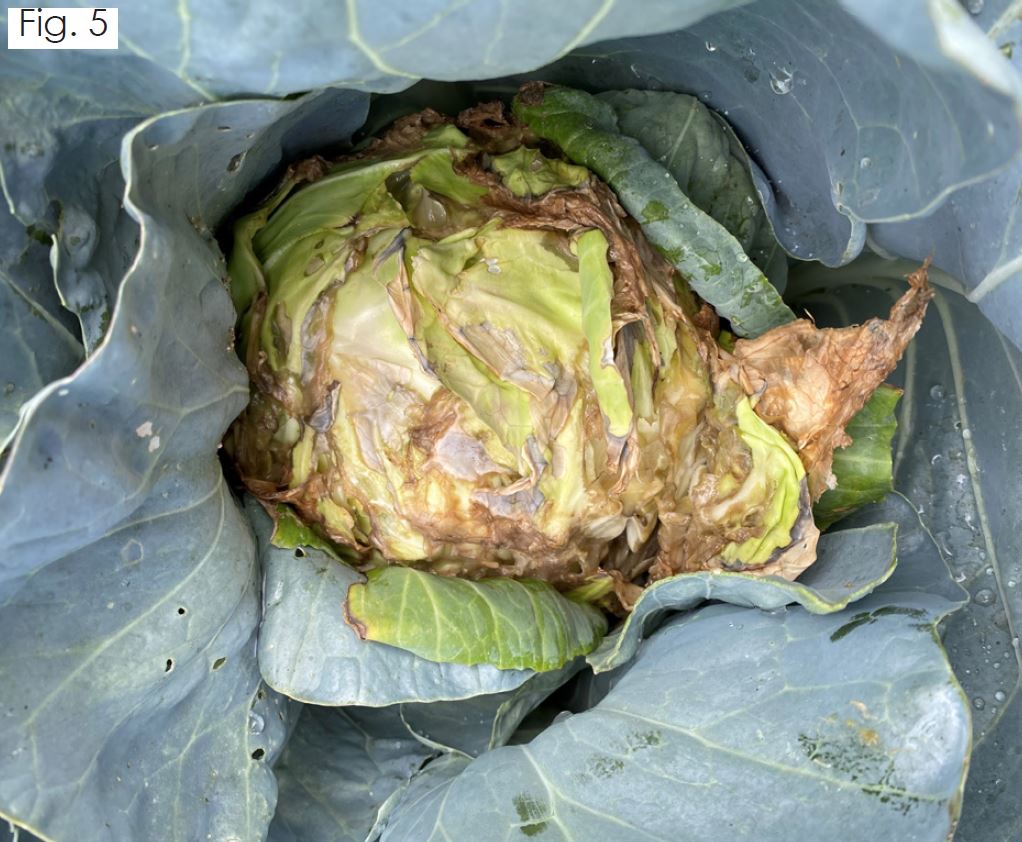 General Info: Bacterial soft rot is (Fig. 5) caused by the bacteria Pectobacterium carotovorum. It is spread by splashing water, various insects, and pruners and other equipment. The disease thrives in a warm and humid environment. Bacteria enter through plant wounds and can survive in plant debris left in the garden. Bacterial soft rot may also develop within stored produce.

Management: Decontaminate knives or other tools used when harvesting and moving from plant to plant. Remove cull piles near production sites as they can harbor bacteria. Make sure soil is well-drained as bacteria spreads with high moisture. 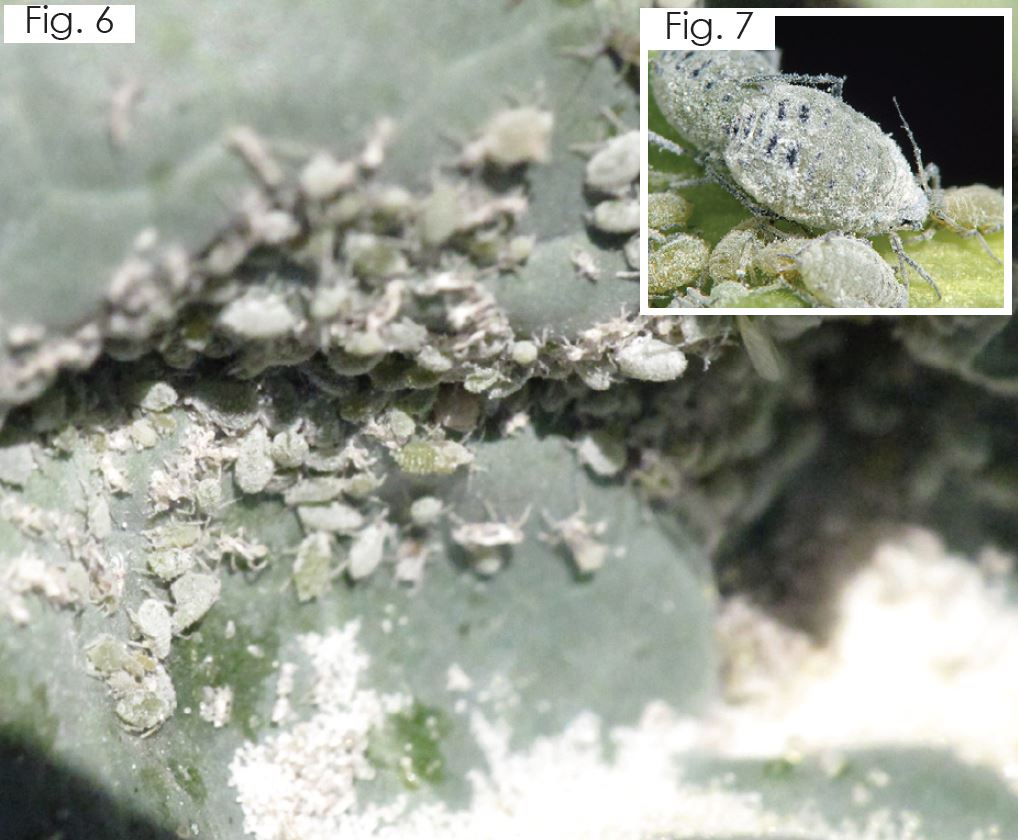 Severity: high
Other Hosts: all brassica crops and related weeds

General Info: Cabbage aphids (Figs. 6 and 7) are small and pear-shaped. They are green and gray with a white waxy coating and have two short “tail-pipe” structures at the end of their abdomen. Adults can be winged or wingless. They form dense colonies on flowering structures and leaves of all ages. Like other aphids, cabbage aphids primarily reproduce asexually. There are many overlapping generations a year. Cabbage aphids overwinter on host plant residue as adults. They feed with piercing-sucking mouthparts.

Management: Apply a row cover over plants to exclude winged adults. Remove plant debris at the end of the season to prevent overwintering. Encourage natural enemies such as lady beetles, lacewings, syrphid flies, and parasitic wasps by planting rows of flowering plants such as flowering herbs, asters, and alyssum. Spray an organic insecticide such as neem oil or insecticidal soap directly on colonies. 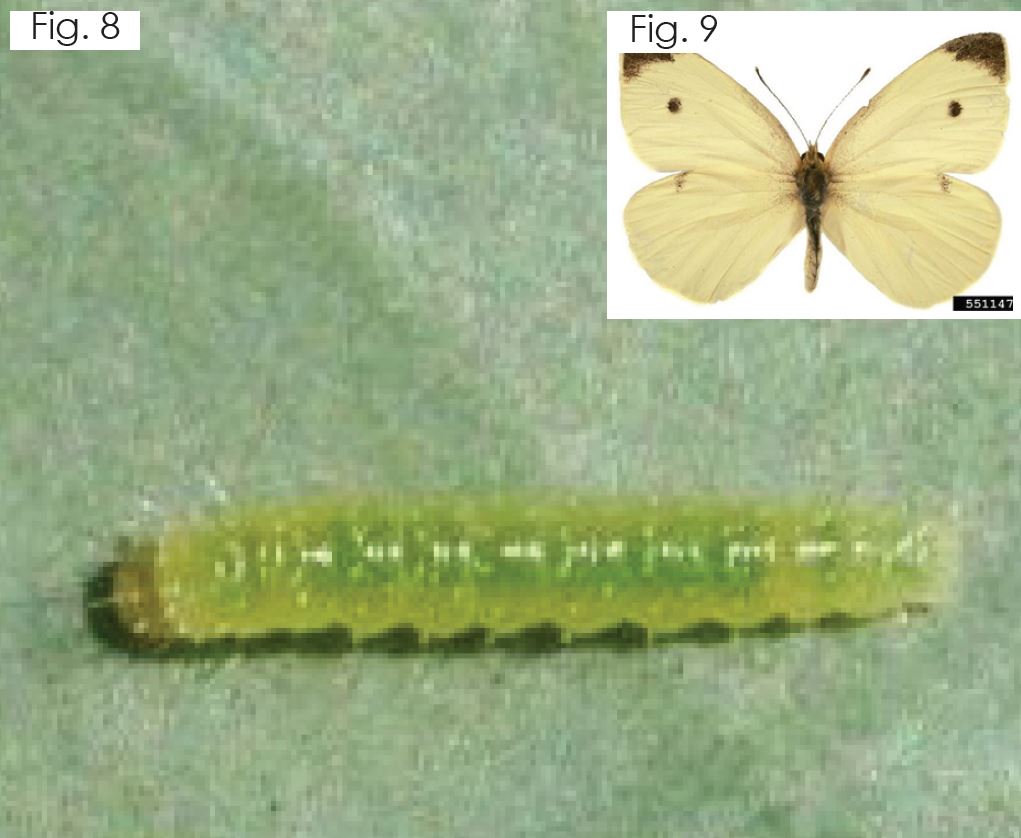 Severity: high
Other Hosts: all brassica crops and related weeds

General Info: Adult butterflies (Fig. 9) are white with black spots and fly during the day. Their wingspan is 2 inches. Larvae are green, fuzzy, and have dense short hairs (Fig. 8). They have a thin yellow stripe along the body, and are 1.25 inches long at maturity. There are three to four generations per year, overwintering as pupae and with peak adult egg-laying in mid-July. 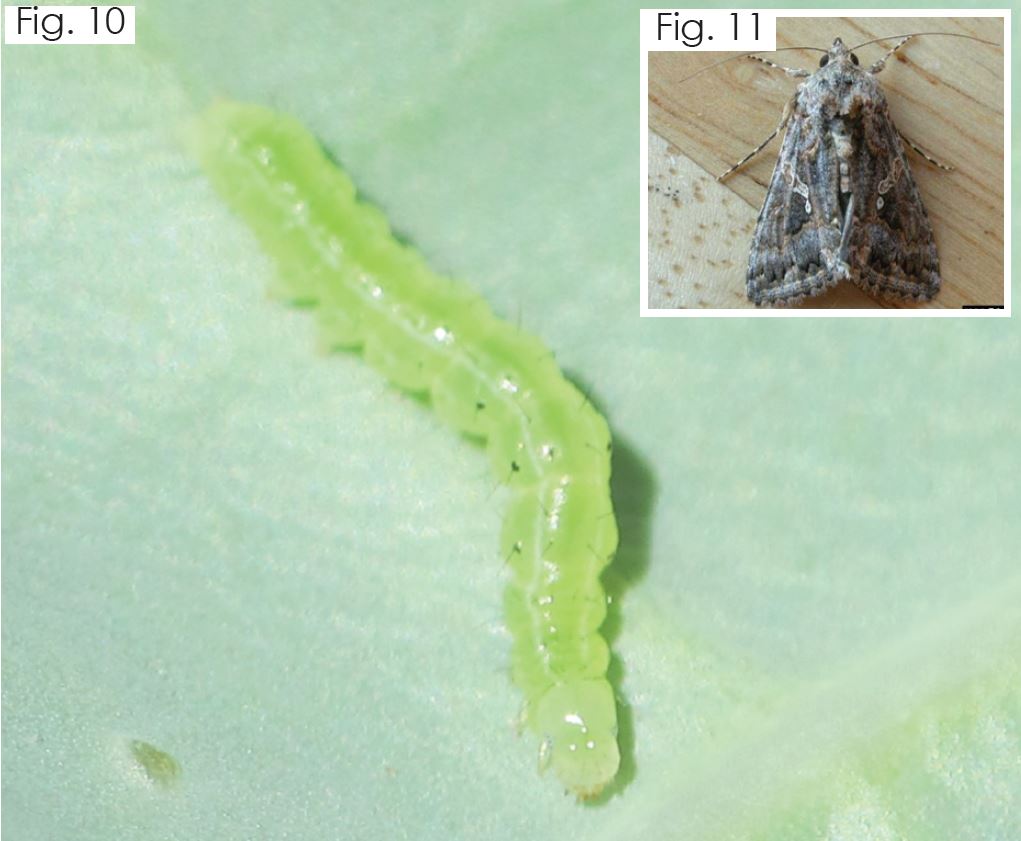 General Info: Cabbage looper adult moths are grayish-brown with a silver “8” markings on their wings. Their wingspan is 1.5 inches. Adults and larvae are semi-nocturnal (mostly active at night). Larva range from pale to dark green with light stripes, are smooth with a few sparse hairs, and more like an inchworm. They are 1.5 inches long at maturity. There are 1 to 3 generations per year. 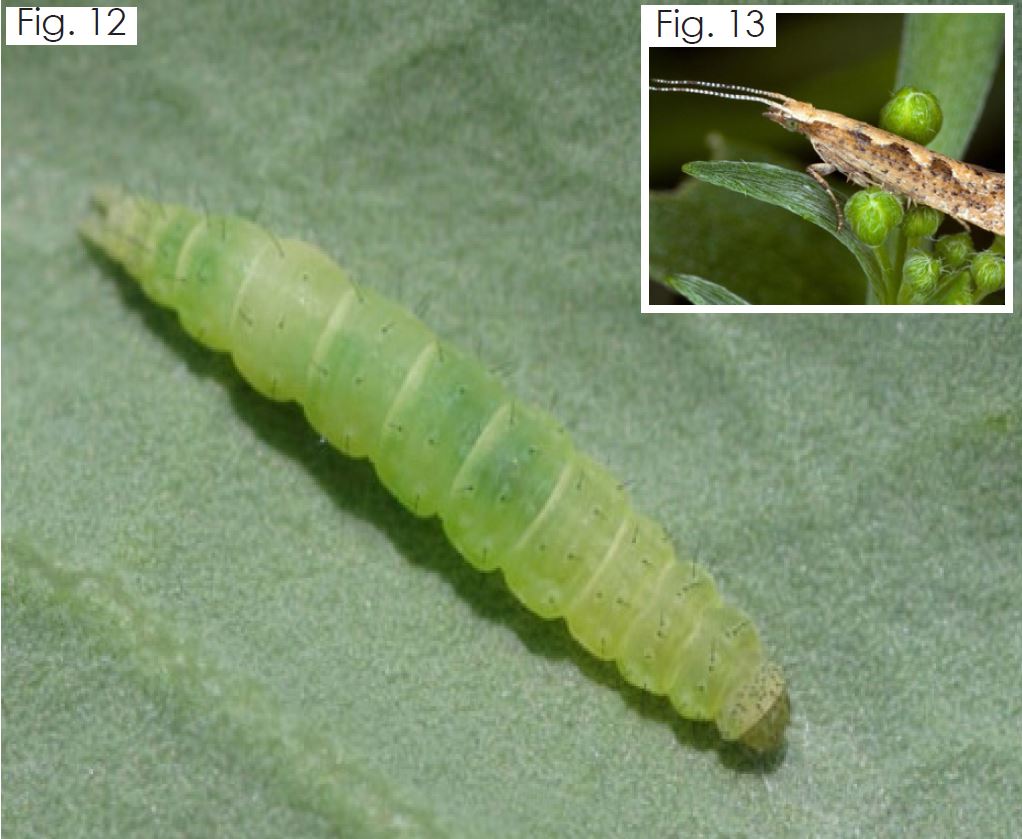 General Info: Adult moths are small (1/3 inch), slender, and gray-brown in color with folded wings that flare outward (Fig. 13). Mature larvae are about 1/3 inch-long with a pale green body that is pointed at both ends (Fig. 12). They wiggle vigorously when disturbed. Adults overwinter in the warmer southern areas of Utah, and migrate north each spring. There are four to six generations per year.

Management: Monitor for feeding damage on foliage. Hand-pick and destroy larvae. Apply a row cover over crops to exclude adults from laying eggs. Protect natural enemies such as ground beetles and spiders. Spray an organic insecticide such as spinosad or Bacillus thuringiensis. 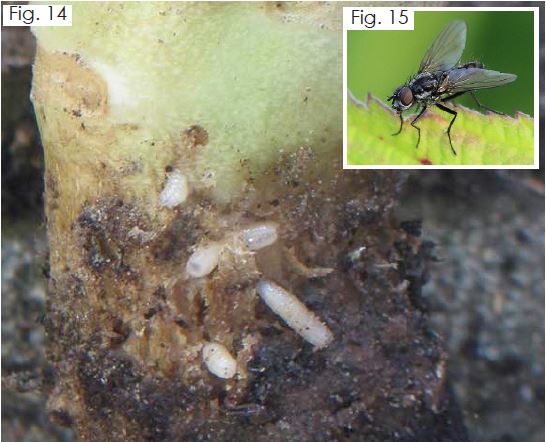 General Info: The cabbage maggot adult is a small gray-black fly (less than 1/4 inch long) (Fig. 15). They lay their eggs at the base of the stem of host crops. Upon hatching, larvae (maggots) feed on the roots, causing the plant to collapse, wilt, and die (Fig. 14). At maturity, larvae will pupate in the soil. Cabbage root maggots favor cool and moist soil conditions. Feeding sites can provide entry for decay fungi and bacteria to enter the plant.

Management: Rotate between non-host crops. Apply a row cover over susceptible crops to exclude adult flies from laying eggs. Consider tilling soil in the fall or early spring to disrupt overwintering pupae. Natural enemies include carabid beetles, rove beetles, and various parasitic wasps. Insecticides such as bifenthrin or pyrethrins (organic) can be used; however, control may be challenging as larvae (maggots) are within the soil.