The goal of Utah State University Extension wildlife programs it to enhance human-wildlife interactions by bettermanaging conflicts through research, education, and outreach. We specialize in working with communities, private land owners, and individuals as well as federal, state, and non-profit organizations to better manage “the good,” “the bad,” and sometimes “the ugly” of wildlife.

To do this, managers may need to change their emphasis of sustaining/increasing populations to mitigating conflicts. This will provide wildlife managers, land managers, and elected decision makers with a new forum to engage a wider range of stakeholders in improving human-wildlife interactions. To make this transition, these groups will need better information about how and why human–wildlife conflicts occur, the magnitude and type of damage occurring, and techniques to manage the challenges of overabundant or rare local wildlife populations. Then communication strategies can be implemented to more effectively involve local government in seeking viable solutions. 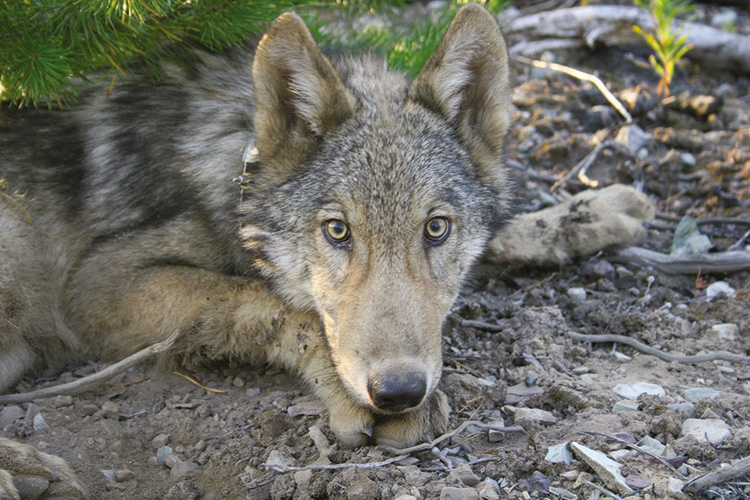 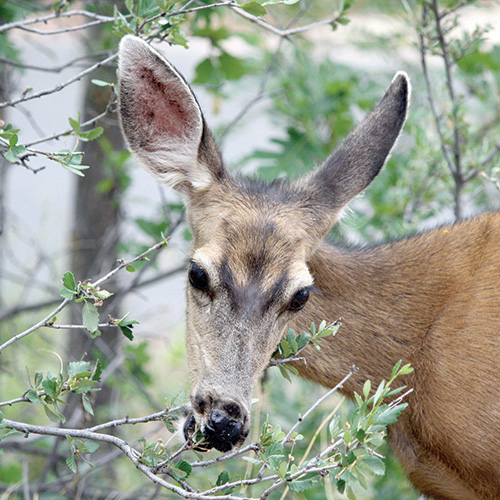 Historically, wildlife and land managers have sought to maintain or increase desirable wildlife species, such as game fish, birds, and mammals, to meet human food and recreational needs by manipulating habitats or populations. This is considered “the good.”

In 1991, several USU Extension specialists served on the Utah Private Land Public Wildlife Committee to develop the Utah Coopera tive Wildlife Management Unit program (CWMU). The program was created to recognize the contribution of and offer additional incentives for private landowners who provide big game habitat and hunting opportunities on private lands. In return, public hunters are allowed to hunt specific big game on these CWMUs through Utah’s big game drawing. In 1994, the USU Wildlife Program organized the CWMU Association as a 501 C(6) non-profit conservation organization. 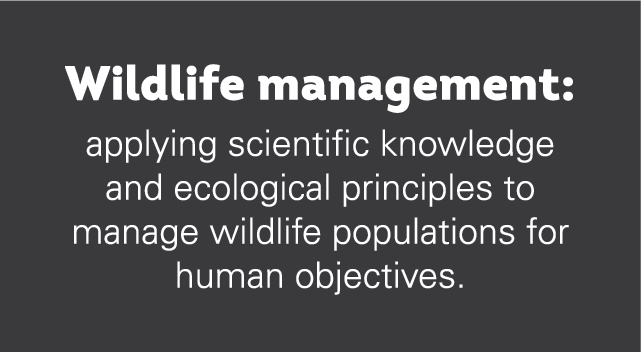 Many rural and urban environments are inhabited by larger populations of wildlife than there were a century ago. Many are facing new threats from invasive species, which further impacts the ecological, economical, and sociological balance of our communities. As local wildlife and invasive species populations increase, so can the economic damage they cause. This is “the bad.”

As housing and developments expand in Utah, rural areas become more urbanized. And with outdoor recreation becoming increasingly popular, there is a rise in concern about safety in these areas. As humans and wildlife compete for space, the number of conflicts will increase.

Utah’s Hogle Zoo, the Utah Division of Wildlife Resources, and USU Extension’s wildlife program have partnered to create Wild Aware Utah (wildawareutah.org) to educate individuals and communities about how to live, work, and recreate safely in wildlife habitats in Utah.

The goal of the WAU program is to create awareness that will foster new attitudes toward wildlife and motivate behavior changes in people, thus minimizing conflicts.

Annually WAU reaches over 500,000 homeowners and landowners via personal presentations, social media, print, radio, and television with timely information on how to prevent human-wildlife conflicts. 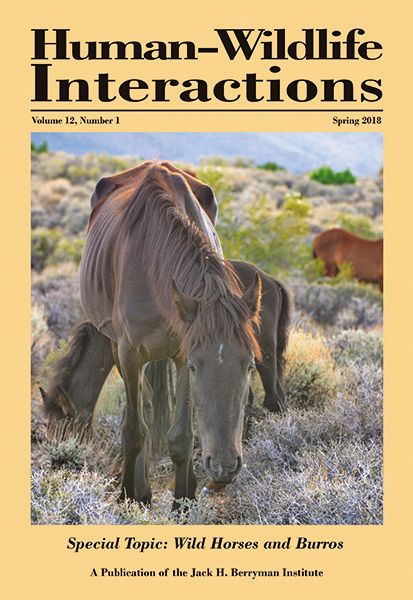 As incidents of human–wildlife conflicts increase, so must the management intensity. The Berryman Institute, a national organization based in the Department of Wildland Resources at USU (berrymaninstitute.org), is dedicated to improving human-wildlife relationships and resolving conflicts through teaching, research, and Extension. The organization publishes Human–Wildlife Interactions, a peer-reviewed scientific journal, three times a year.

Human–Wildlife Interactions is an open-access journal dedicated to publishing manuscripts that report research, management case studies, and policy perspectives to assist professionals. The journal makes it possible for wildlife managers to create new forums to engage a wide range of stakeholders in conservation.

Human–Wildlife Interactions is dedicated to providing wildlife managers and all stakeholders with this information. It is the only peer-reviewed professional journal dedicated to providing wildlife managers, land managers, and urban stakeholders with science-based information to better manage human-wildlife conflicts. Digital Commons and USU libraries have partnered to provide readers and authors with the very best in publication support and service. Human–Wildlife Interactions can be found at digitalcommons.usu.edu/hwi/. 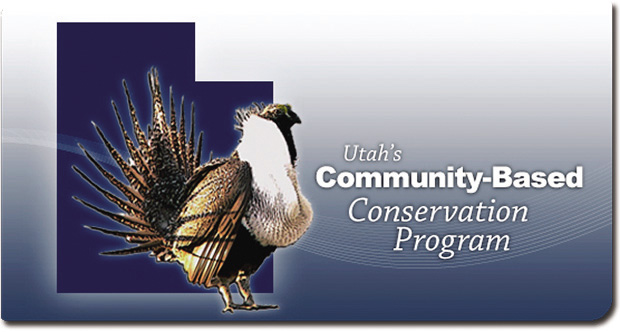 As desired native species that inhabit private lands decline, the potential exists for increased land-use conflicts as regulations to protect declining species are implemented under the Endangered Species Act (ESA). The policies are sometimes referred to as “the ugly” of wildlife management. Often, local communities and landowners most affected by these policies may have little input on the decisions. 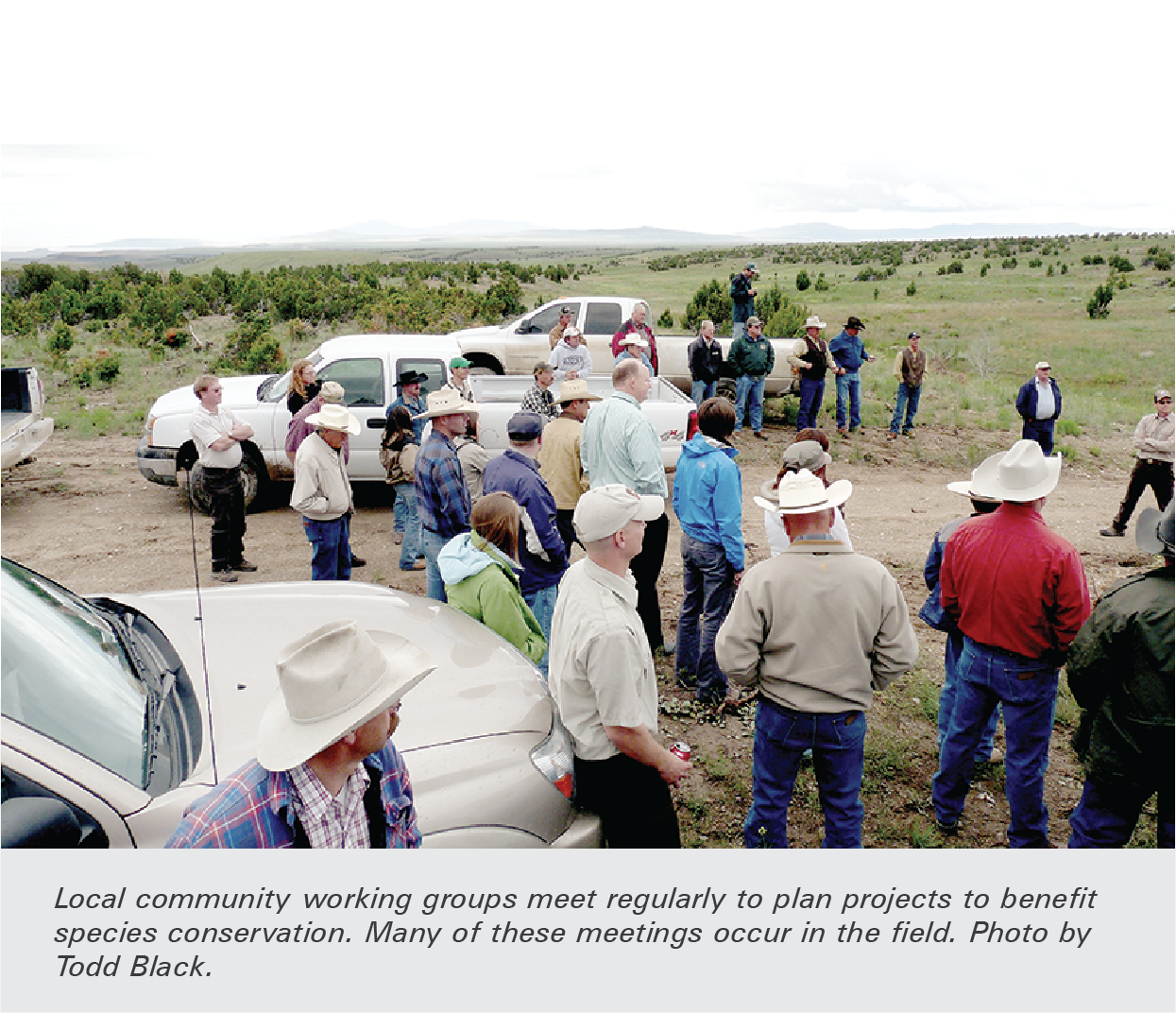 In 1996, USU Wildlife Extension began a long-term partnership with the Utah Division of Wildlife Resources to develop adaptive resource management local working groups (LWG) throughout Utah to address local Endangered Species Act issues. The program was named the Utah Community-Based Conservation Program (CBCP) and has initially focused on reversing the declining greater sage-grouse populations; a species that was petitioned for ESA protection. The CBCP goal is to negate the need to list a species for ESA protection by fully engaging local communities most affected by ESA listings in voluntary, incentive-based conservation actions. This will eliminate the threats causing a species population decline. Visit utahcbcp.org.

Creating a Voice of Local Communities: A Solution 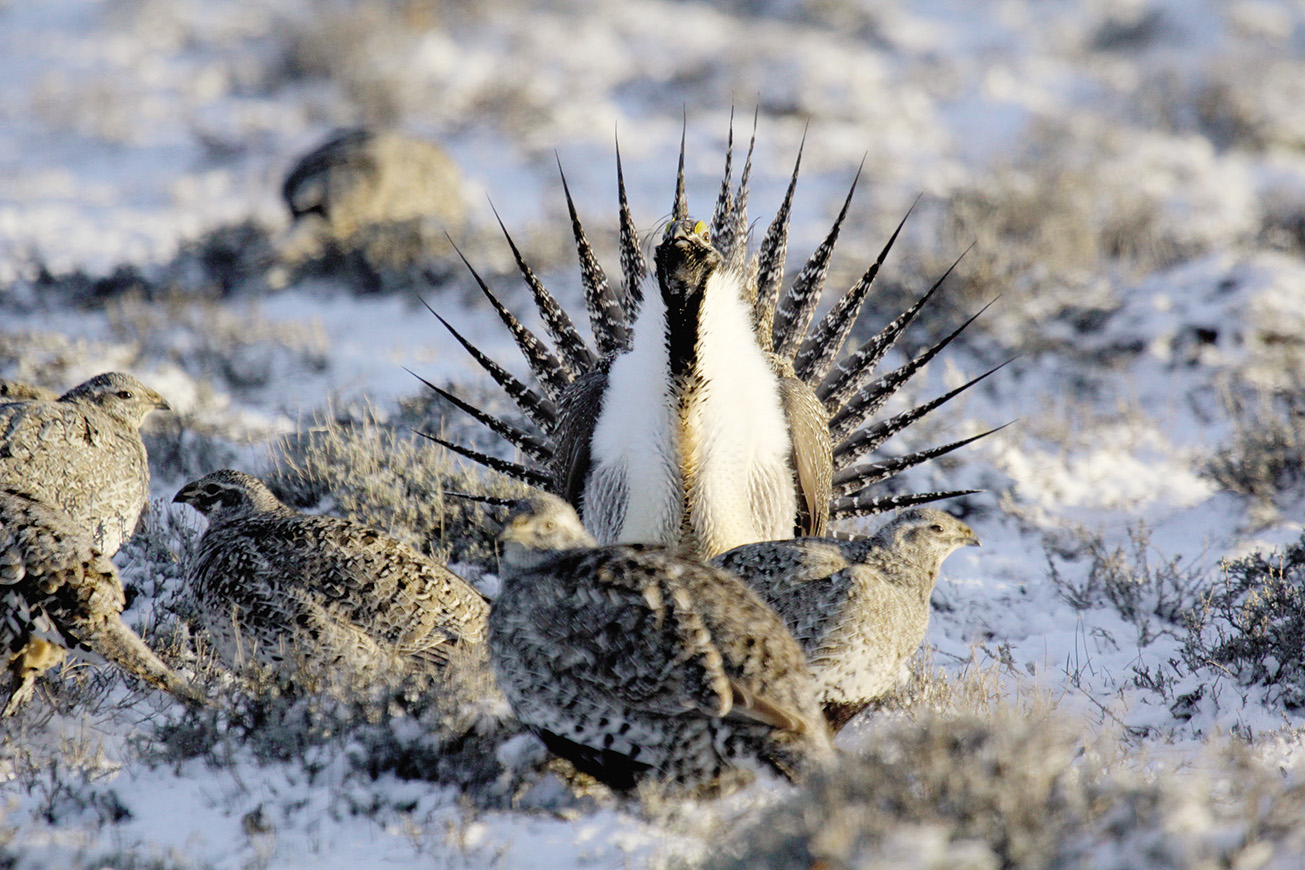 The CBCP updates stakeholders on emerging issues and new research through quarterly meetings, field tours, newsletter distribution to over 2,000 stakeholders, and email alerts. The CBCP has organized state, national, and international summits, forums, and conferences (sage-grouseforum.org/, sagebrushconference2016.org/, wildlife.org/wild-horse-and-burro-summit-highlights-science-and-urgency/) where they have engaged thousands of stakeholders in open dialogue and actions to best conserve sage-grouse, the sagebrush ecosystem, and working landscapes.

Sharing the costs and rewards 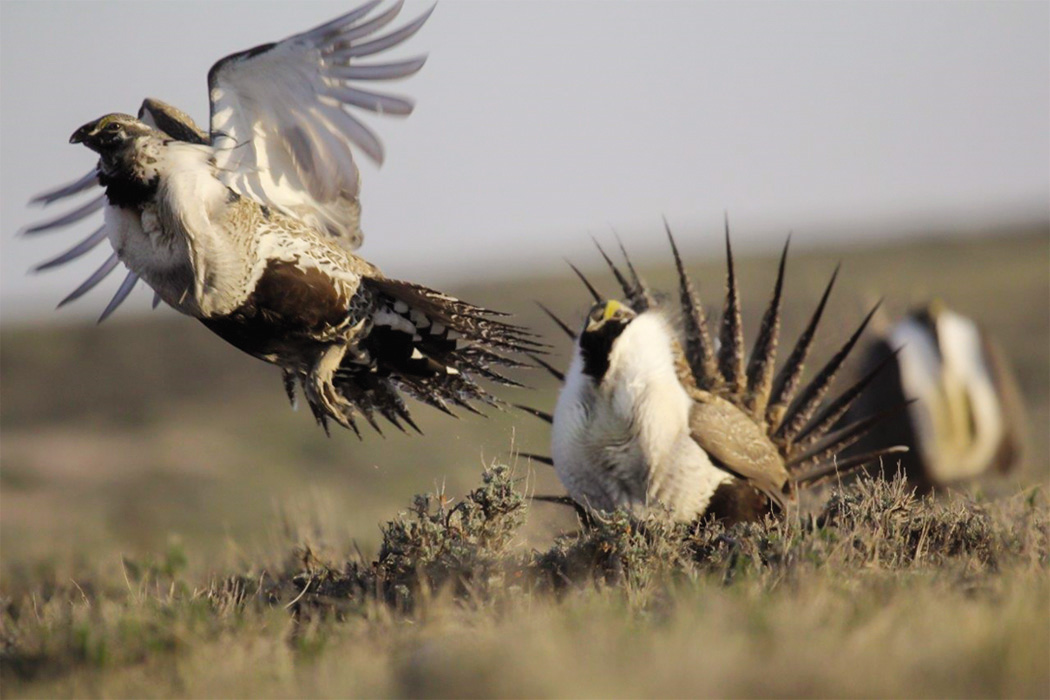 Support for the CBCP comes from ongoing Utah legislative funding provided to the Jack H. Berryman Institute and USU. Addition- ally, federal, state, and private partners contribute over $300,000 annually to support the CBCP process, and another $200,000 is generated through grants and contracts to support graduate students and research technicians as they address research questions.

In 2013, the Conservation of Greater Sage-grouse in Utah Plan was published. The plan was built on nearly two decades of CBCP research and community involvement. Plan implementation has addressed sage-grouse conservation threats while balancing the socio-economic needs of the residents of Utah through incentive-based programs on private lands and reasonable, regulatory approaches on public lands.

In February 2015, Governor Herbert signed an Executive Order to fully implement the plan. The order credited the CBCP for the research and community involvement was essential to building the plan. The CBCP process has translated conservation planning and research into management, and management into population change. This further validates the role of community-based conservation strategies to remove the need to list a species for ESA protection. Because of the success of the CBCP at providing local information to affect national policies, it has increased community involvement in sustainable conservation – a win-win for both people and animals. 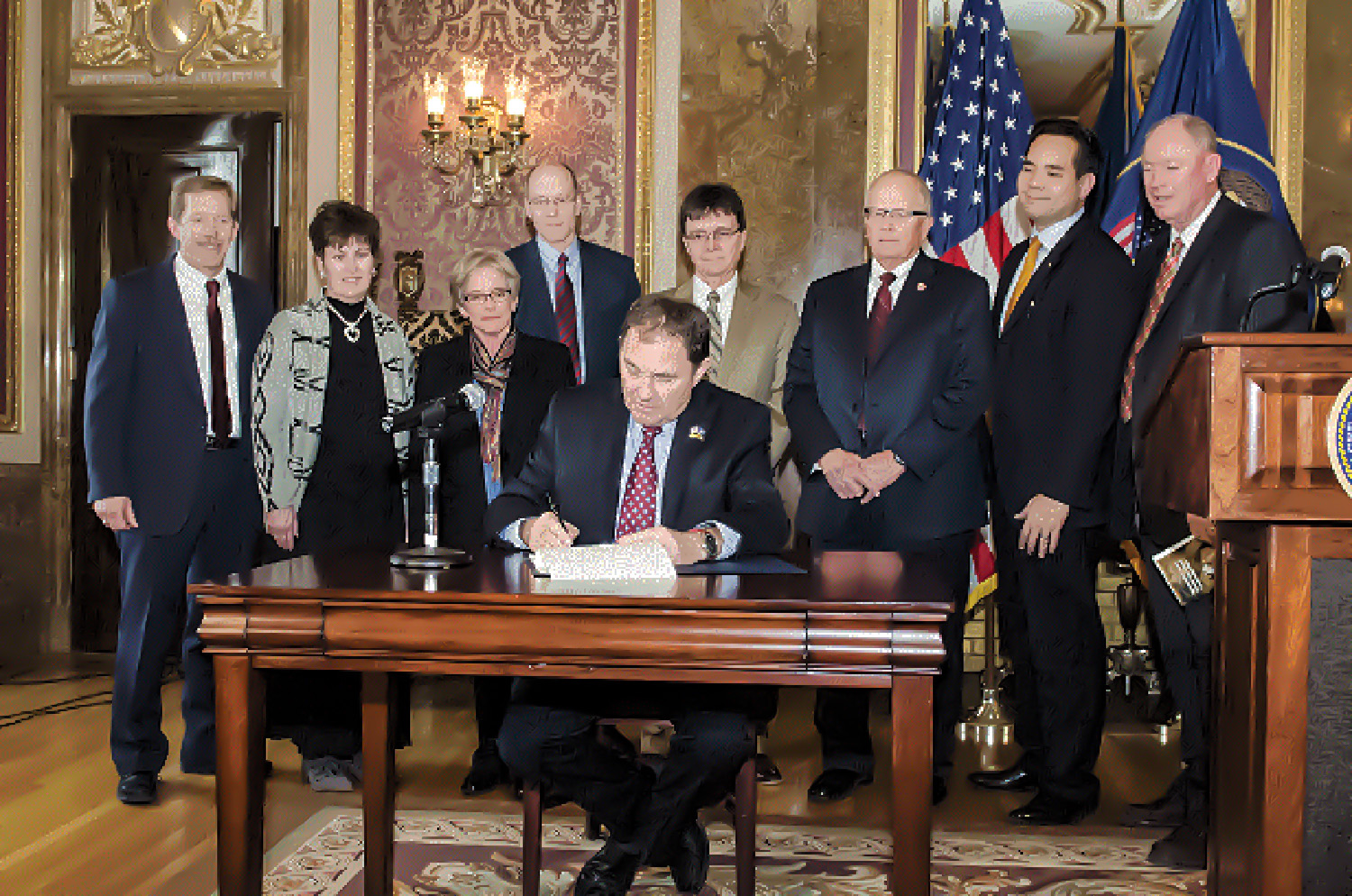