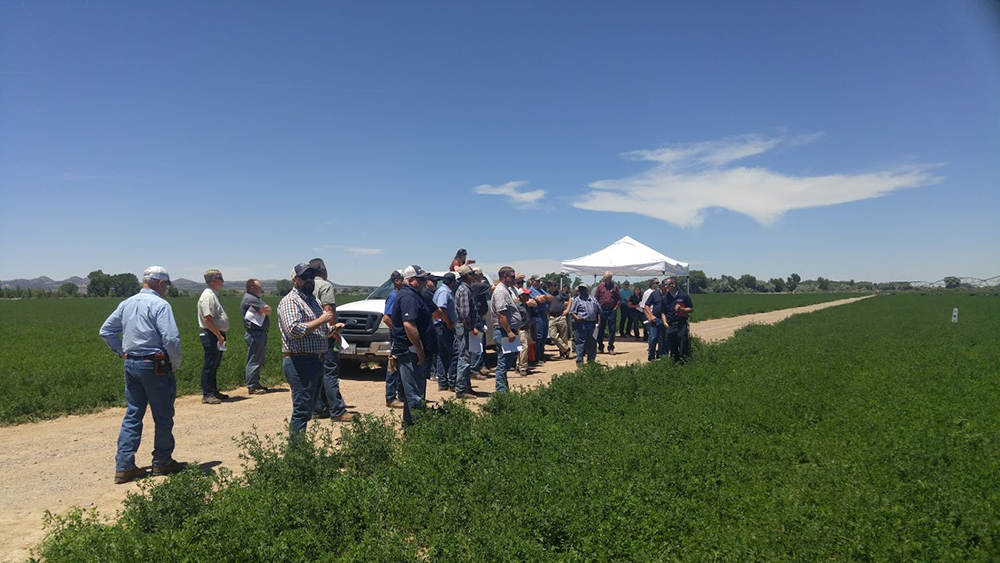 Utah has over 18,000 farms and ranches spanning 11 million acres, that generate more than $21 billion in total economic output (after adjusting for the multiplier effect). While it is true that Utah becomes more urbanized each year, it is also true that agriculture continues to play a vital part for our state.

As the population of Utah and the United States continues to grow, food production is more important than ever before.

Utah State University Extension has led the way for 105 years in providing non-biased, research-based technical assistance to producers and the Utah agricultural industry.USU Extension has nationally and internationally recognized faculty with expertise in all areas of agriculture production and science. Our on-campus and county faculty conduct cutting-edge research that is disseminated to producers and other stakeholders through methods such as field days, workshops, printed and online publications, classes, online courses, and social media outlets. Extension continues to meet the needs of traditional agriculture while evolving to meet the needs of developing agricultural industries and issues.

Utah is the second driest state in the nation, so irrigation efficiency, water conservation, and improved water efficient crop varieties continue to be focus areas for our faculty and researchers. With urban and small farms becoming more popular, Extension faculty are working with producers to find innovative ways to produce food on minimal acreage.

Please read below to see the impacts USU Extension is making in Utah’s agricultural industry. 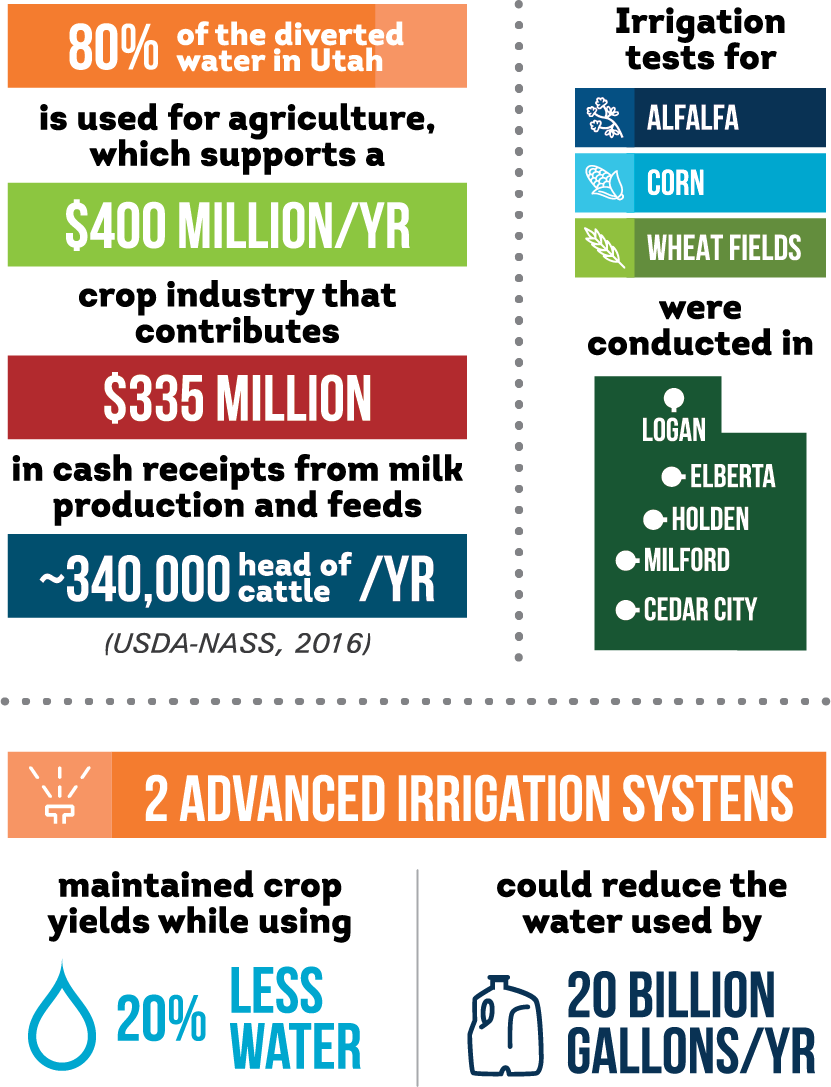 Water optimization in agriculture is a high priority given mounting concerns about water scarcity due to rapid urban growth, depleting water supplies in some areas, and anticipated water shortages in the future with less snow-pack. A high potential solution for water optimization includes improving irrigation efficiency. While new pivot irrigation systems such as low-energy precision application and mobile drip irrigation are available on the market, few tests have determined whether they can maintain crop yield with less water.

Three field days for Extension faculty and local and state government person- nel were hosted in 2018 to demonstrate and provide training on the two new irrigation systems. Early results from the trials indicate that the two advanced irrigation systems can usually maintain crop yields with 20% less water applied. If these systems were used on half of the pivot-irrigated acres in the state, it could result in annual reductions in applied water by nearly 20 billion gallons. These results will be validated in coming growing seasons, and results will be expanded to include how these systems influence total water budgets for agricultural fields.

Virulent Newcastle disease (vND) is a contagious and fatal viral disease caused by avian paramyxovirus type 1 (APMV-1) that affects the respiratory, nervous, and diges- tive systems of birds and poultry. The disease is so virulent that many birds and poultry die without showing any clinical signs.

The first incident of vND ever discovered in Utah was diagnosed at the Central Utah Veterinary Diagnostic Labo- ratory (CUVDL) in Spanish Fork, Utah, in January 2019. The disease was introduced into Utah by the unauthorized transport and entry of infected chickens.

Working closely with the Utah Department of Agriculture and Food, David Frame, USU Extension poultry specialist, acted as an adviser and cooperator in taking quick action to eliminate this serious disease threat to Utah’s commercial poultry industry. The flock was depopulated, carcasses disposed of, and the premises carefully cleaned. Industry groups were contacted and overall biosecurity measures were tightened within the industry. Frame also worked closely with commercial poultry company veterinarians, and precautions at the CUVDL were taken to limit poultry producer traffic and to minimize cross contamination. 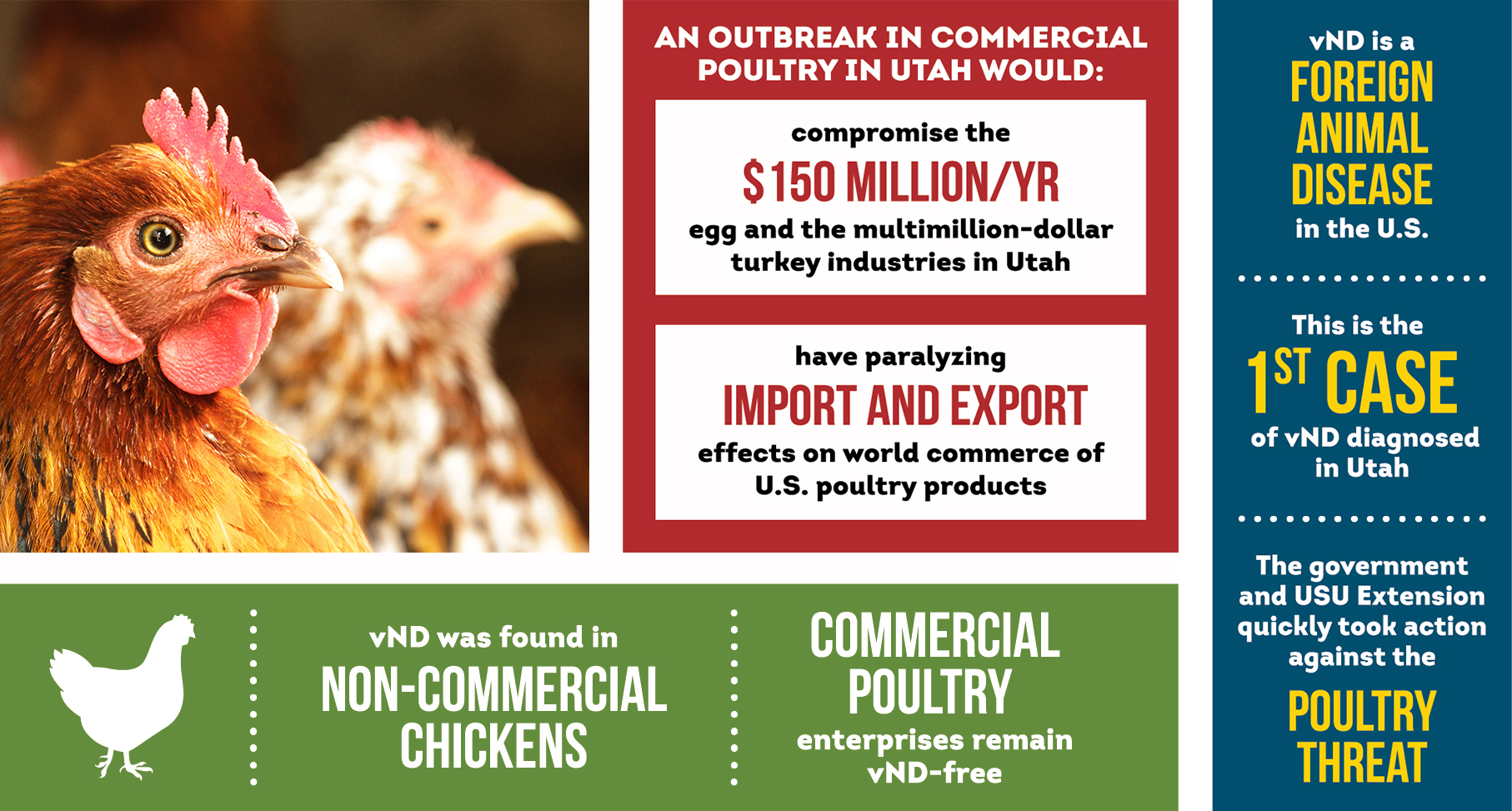 The dairy industry is important for Utah’s economy; however, it has changed considerably over the years. The number of dairy cows has stayed at approximately the same level for at least 30 years, but the number of dairies has significantly declined at an accelerated rate over the past 2-3 years. This means that dairies are fewer and much larger. As dairies get larger, there is an increased emphasis on “managing” a dairy. This means more emphasis on evaluating how the dairy is performing and how to fix problems.

USU Extension Dairy Specialist Allen Young and other researchers with USU Extension’s dairy program have worked to help dairies develop and evaluate production practices and the associated economics so they can make better management decisions. This has been especially useful for farmers when discussing finances and interacting with their bankers.

As dairies get larger, more non-family labor is being used. In the past several years, labor has been in short-supply. This makes it difficult or impossible to accomplish the needed tasks to run the dairy. One solution has been to install robotic milking systems. A new, emerging area for Extension is to be a resource for dairy producers who want to make this transition and to make management decisions after they have converted to the new system. This will continue to be an area of focus in the future. 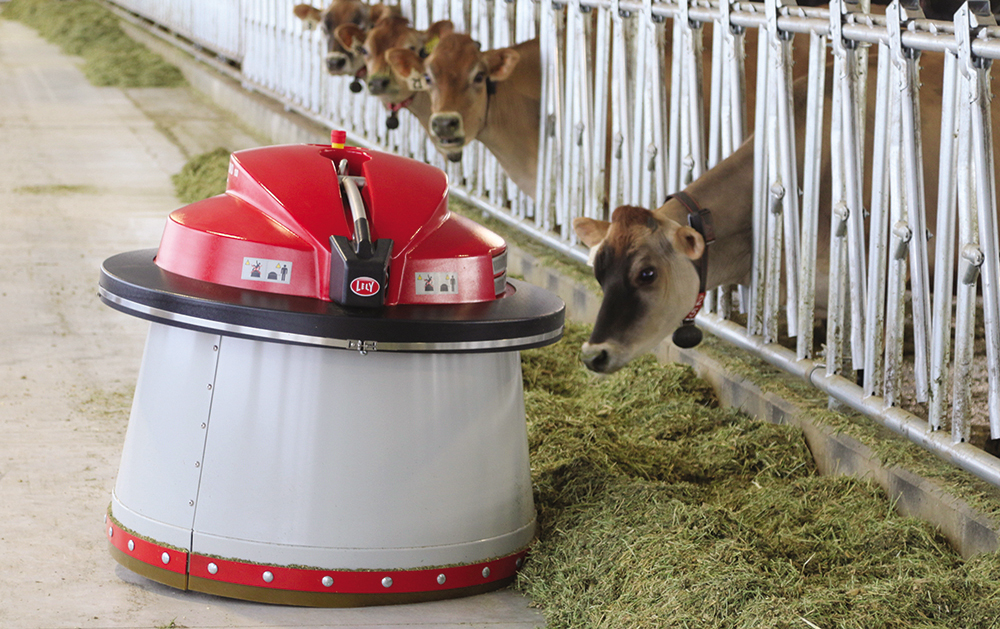 Consider Whole Systems When It Comes to Beef Cattle

Many producers do not understand that production decisions made at any point in the production system will have upstream and downstream effects for years to come. To address this problem, Matthew Garcia, Extension beef cattle specialist, and others in the beef cattle Extension program have proposed using a whole systems approach. Many producers believe that decisions made during the breeding season will only impact the calf crop that is produced. However, the reality is that the decisions made during this production time will affect them for many years down the road.

Garcia and other researchers conducted many on-site programs, and it was concluded that not only do the early decisions affect the type of calf crop that is marketed, but they will affect reproductive programs for many years after (replacement animals being incorporated into the herd). The decisions will affect nutrition programs, grazing strategies, and future potential for genetic improvement. A concerted effort has been made to introduce producers to the ramifications of those decisions, both upstream and downstream. 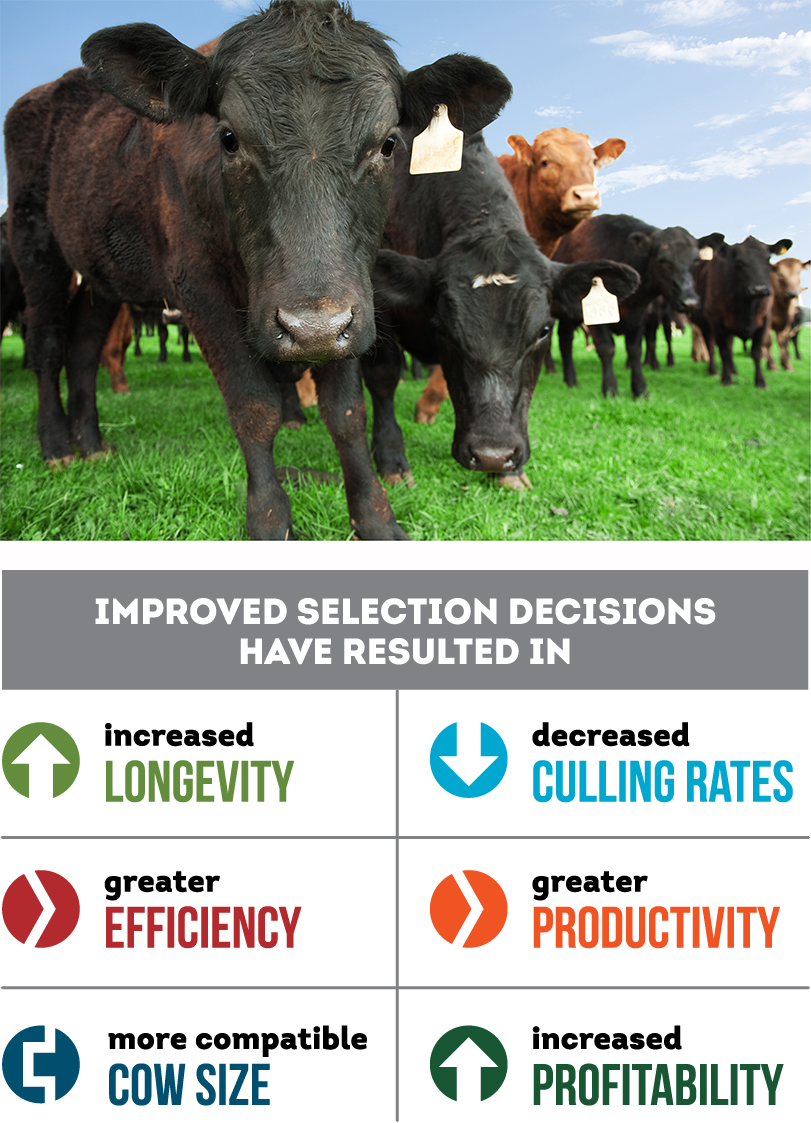 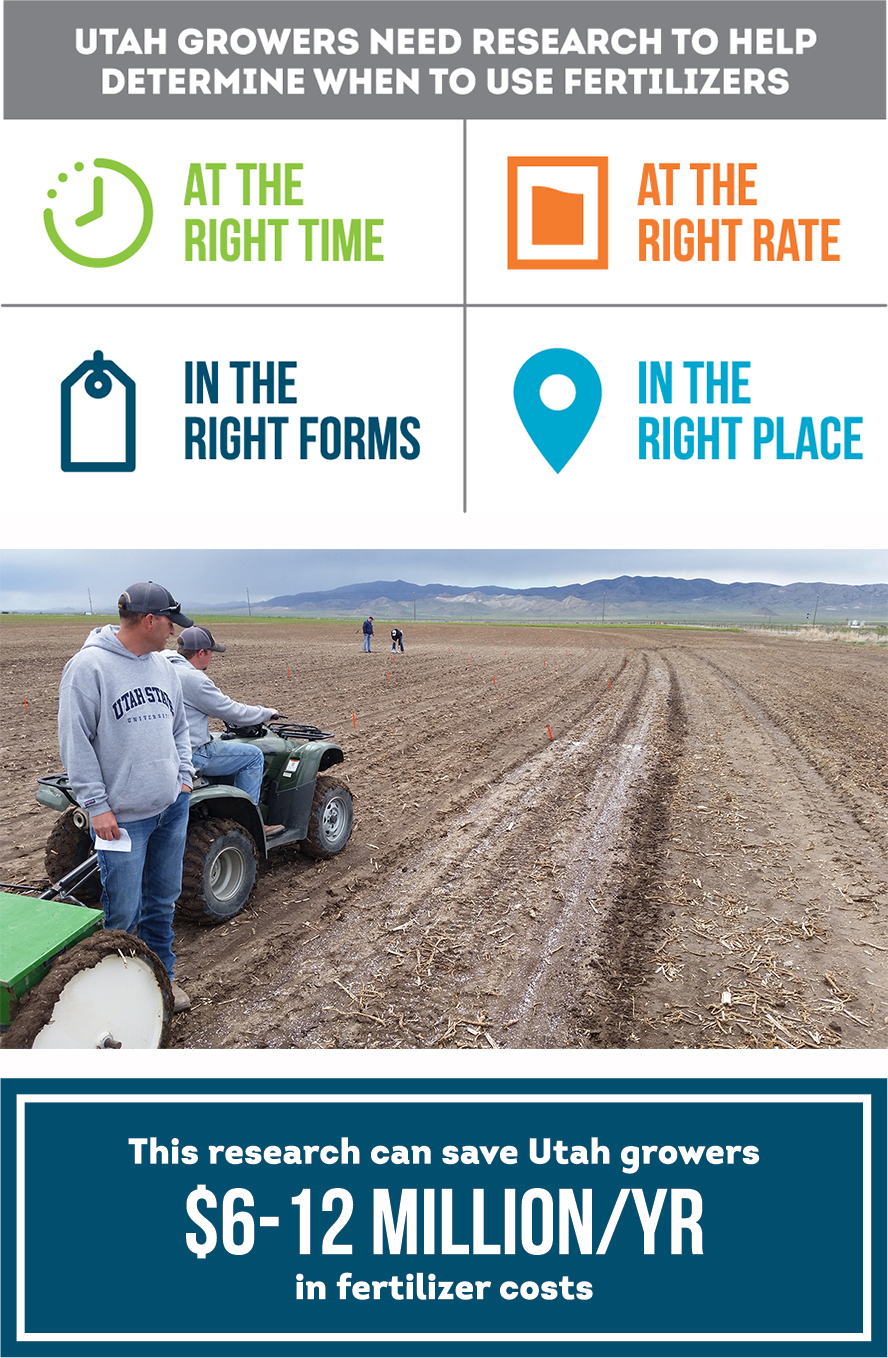 One of the key issues facing production agriculturists and horticulturists, urban and small acreage farmers, and local homeowners and gardeners is using fertilizers at the right time, in the right forms, at the right rate, and in the right place. Mismanagement of fertilizers can result in excess nutrients moving into surface or groundwater, causing salt buildup in soils and resulting in lost income due to unnecessary fertilizer application.

Grant Cardon, USU Extension soil specialist, and other researchers under- took an extensive multi-site, multi-year investigation of the potential of crediting residual soil nitrogen following alfalfa, toward the nutrient needs of subsequent years (1 or 2) of rotational silage corn production. Over five growing seasons and 35 site-years in eight counties in Utah, it was found that there is little to no need for additional nitrogen in the first year of rotational silage corn production, and, though less-pronounced, in the second year of production following alfalfa.

Alfalfa, being a legume crop, works in symbiosis with soil bacteria to fix nitrogen in its root system that is left behind and slowly made available to subsequent rotational crops. Revisiting this question through this extensive study indicates that previous crediting guidelines may be far too conservative – at least for silage corn production in rotation with alfalfa.

The potential impact of this research is seen in the projected savings to silage corn growers, particularly in the first year of rotation out of alfalfa. Estimates of fertilizer cost savings to Utah growers is between $6 million and $12 million annually — a large savings compared to the value of the crop.

There is work yet to be done to continually confirm these findings, but the potential for considerable cost savings from reduced nitrogen fertilizer inputs and the associated environmental benefits of reduced nitrogen application is significant. 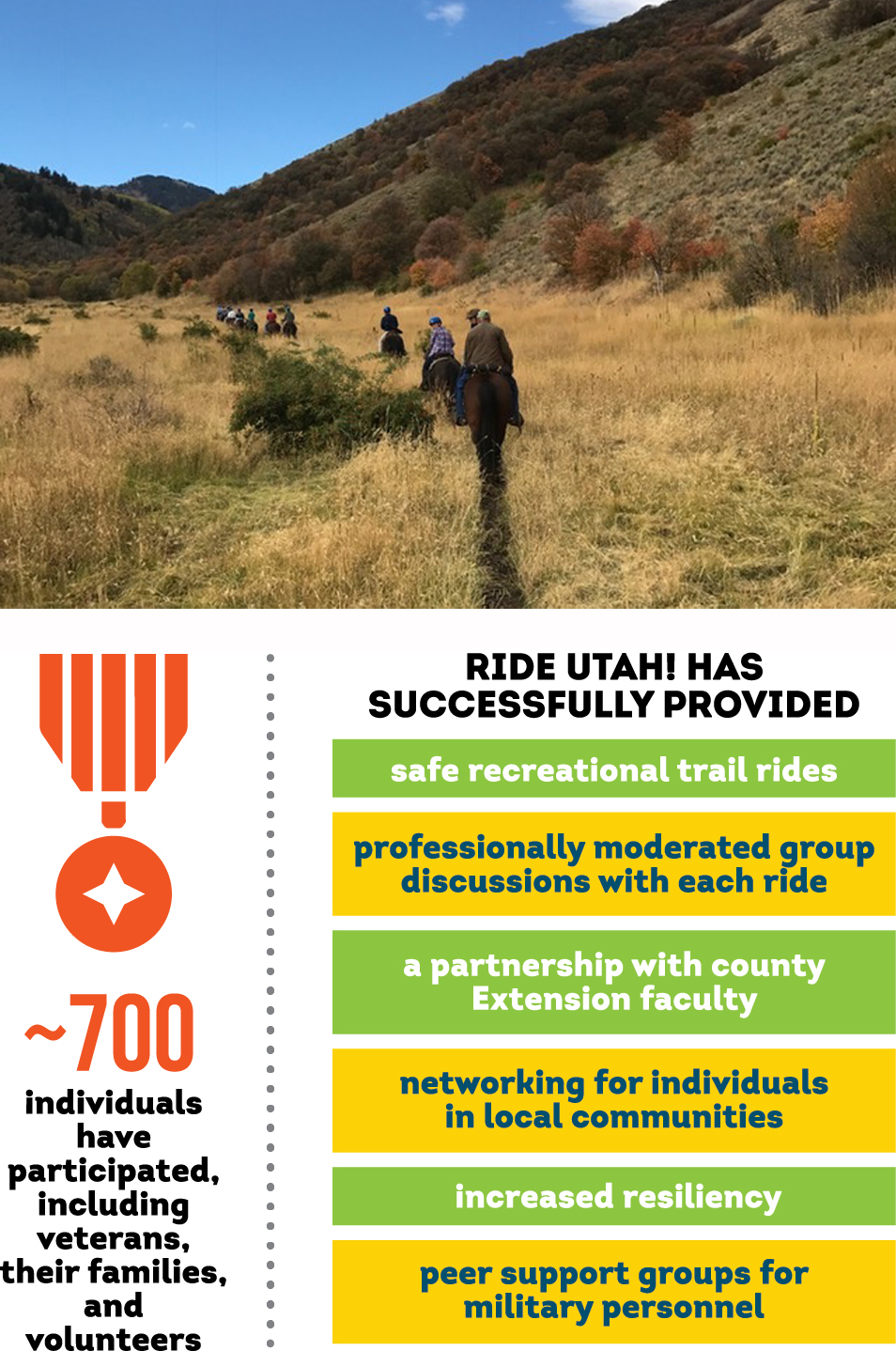 Military personnel and veterans are often prone to experiencing mental health challenges. However, due to the social stigma and other negative beliefs regarding mental health services, they often don’t access the services available to them, and many suffer in silence.

Current research has shown clinically significant benefits from therapeutic horse activities, which prompted USU Extension to develop a therapeutic equine program for military personnel and veterans. In 2016, USU Extension Veterinarian Karl Hoopes was awarded a $10,000 seed grant, and Ride Utah! was developed. The program is hosted by USU Extension, community, and military leaders, and provides participants with the opportunity to experience a two-hour mountain trail ride, share a family-style lunch, and participate in a group discussion surrounding military family issues moderated by a licensed professional on marriage and family relationships. Ride Utah! allows individuals and families living in both urban and rural areas the opportunity to experience the therapeutic benefits offered by equine activities and nature. The results from the participant-completed Conner-Davidson Resiliency Scale demonstrate that Ride Utah! is harnessing Utah’s natural beauty and resources into a successful program that is improving veteran’s mental health and strengthening families and communities.